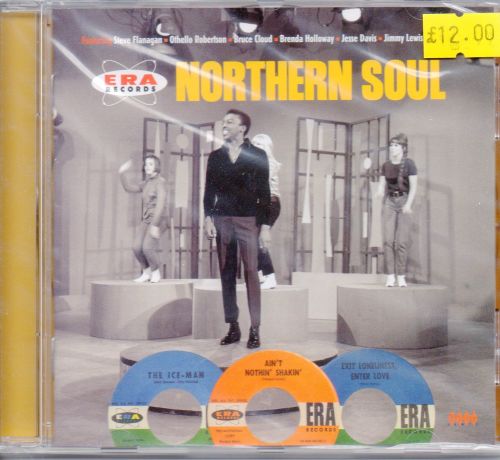 Herb Newman’s Era Label was well established in Los Angeles by the time the soul era (pun intended) came about. With over 150 singles behind him by the time our musical story starts in 1962, Herb was a record label veteran.

He only occasionally dabbled in black music, probably by chance as opposed to design, he was more at home with straight pop records. His biggest hit by a black singer was Jewel Akens ‘The Birds And The Bees’ which was total pop but came out of a notable session by the accomplished soul group the Turn Arounds whose two great Era numbers feature here along with the full story of that hit. Akens could sing soul as well as pop though and a great late 60s stomper, written and produced by Eddie Daniels, has been unearthed and debuts here. Herb Newman actually had a notable future soul star in his ranks when the young Brenda Holloway recorded ‘I Ain’t Gonna Take You Back’ for his Catch subsidiary in 1964.
1.THE ICE MAN - Billy Watkins
2.SO IN LUV - Othello Robertson
3.I'VE ARRIVED - Steve Flanagan
4.MEET ME AT MIDNIGHT - Bruce Cloud
5.AIN'T NOTHIN' SHAKIN' - The Turn Arounds
6.WHAT CAN I DO NOW - Jimmy Lewis
7.EXIT LONELINESS ENTER LOVE - Melvin Boyd
8.MY BOOK - Bruce Cloud
9.I WANNA KNOW - Carol Connors
10.BOOMERANG - The Lovemates
11.THE BLUE SHADOW - Vince Howard
12.ECHOES IN THE NIGHT - Tommy Moseley
13.I GET A FEELING - The Soul-Mates
14.RUN AWAY AND HIDE - The Turn Arounds
15.I NEED TO BE LOVED SO BAD - Steve Flanagan
16.GONNA HANG ON IN THERE GIRL - Jesse Davis
17.YOUR GOOD LOVIN’ - Jewel Akens
18.DANCE WITH ME - Billy Watkins
19.SIR GALAHAD - The Elites
20.A SLICE OF THE PIE - Bernie Byrd
21.YOU AND YOURS - The Composers
22.I AIN’T GONNA TAKE YOU BACK - Brenda Holloway & The Carrolls
23.STAND THERE MOUNTAIN - Vince Howard
24.COME ON HOME - Othello Robertson